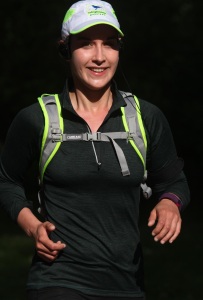 Image description: Picture of me running and sweating, from the waist up. I am wearing a dark green tunic, white cap, and a bright yellow backpack.

A few years ago, I participated in some weekly track workouts through the local running club. I was newer to running, and wanted to learn a few tips before embarking on my first marathon. Though my interested in repeatedly circling the rubber university track eventually waned, I did pick up a basic vocabulary of running, some valuable information about form, and a newly formed love/hate relationship with planks. The takeaway that remains with me to this day, however, is the concept of “all guts.”

I’ve written about this on the blog before, but there is a certain point where intellect, calculation, risk awareness, and planning fail the runner. This is usually during the last stretch of a run or a race. Picture this familiar scene:

You are rounding a bend at a slight incline for what seems like the hundredth time during the race. Sweat has accumulated as salty patches at your hairline and on your upper lip. All you smell is salt and your own sweat. The sun is starting to beat down more strongly. The chill of the morning is dissipating. The arches of your feet are starting to feel the effect of miles of friction. Your fingers are starting to tingle. Your lips are gummed up with stringy mucous. You pass the penultimate mile marker, gearing up for the last stretch…

This is precisely where “all guts” serves me so well every time. Good running is about mindfulness and clarity of mind, but those methods of mitigating the noise lose efficacy over time and distance. Beyond that, particularly in a race day situation, there are so many other variables pulling at the brain for attention. Stimuli, time goals, self-imposed expectations, these are all in play as one powers through the corridor of bystanders tinkling cow bells and cheering you on. Sometimes it is too much. Sometimes, often, you want to crash. That last terrible wall looms, the one that cheats you out of a strong finish, the one that cheats you out of a time goal. That wall is self-doubt, and it amounts to folding when you have a perfectly good hand.

When I get to this place, I start to whisper cheer to myself “all guts, all guts, all guts.” Sometimes I say it under my breath as I run the last mile. I was introduced to this concept during mile repeats at track workouts. We were encouraged to run the fastest mile we could, as a way of setting a base personal record. Finishing the third lap, there was this one coach who would yell “all guts!” as we curved into the fourth a final lap. He said it kindly, but excitedly. And each time, this reminder was very effective. It was a cue to shut of my frontal lobe, embrace my primal humanity, and simply run hard.

I was running a 10K race yesterday, and feeling strong throughout. I knew I was averaging somewhere between 8:15 and 8:30 a mile, and that is pretty speedy for my body at that distance. Shortly after hitting the 5 Mile marker (and running for a few miles up to that point in relative solitude), I turned the corner to crowds of race volunteers and people. The appearance of all of this broke my focus and I was suddenly aware of my own exhaustion. My legs, spoiled from my penchant for trails, realized I tricked them into a road run. I really wanted to slow down and take a long walk break, but I didn’t. Instead, I kept running and did a brief body scan. Was I feeling sharp pain? No. Did I have a side cramp? No. Was I short of breath? No. I was feeling that overload at the end of the race… I was feeling the last wall creep up. “ALL GUTS!” I shouted in my head, “ALL GUTS! ALL GUTS!”

And I shouted that all the way to the finish line until I crossed, looked up at the clock, and realized I set a new 10K race PR.