I ran my first fall race yesterday, the Bellingham Bay Marathon Half Marathon. Despite training all summer, I did not end up running a marathon. On top of that, I had a pretty cruddy run yesterday. My time was a 20 minute improvement over last year, but I struggled to run the race. My struggle was not physical—in fact, training for a marathon and then running a half marathon is a great way to go physiologically. However, I encountered many mental walls, including a general feeling of motivational malaise throughout the event.

My brief reflections as I revisit what happened yesterday:

I think I need a reboot. I need to reconnect with running, and find its love and compassion again. I need a time out from speed goals.

My proposal is to run a trail half marathon next month. It’s a race I have never done before, and the sheer elevation gain will make it impossible to finish anywhere remotely close to what I am used to. It will be about endurance, the process, natural beauty, and making it through. Yesterday felt hollow. I did not feel reborn. I felt, a little less stellar than I do after a regular long run.

And why is that? Because, for me, when I start running for extrinsic rewards, for the approval of others, my soul is diminished. However, when I run from the heart, for nobody other than myself, I feel like I am flying. I transform.

This is where I am right now… figuring things out, trying to navigate how I want to approach running in the coming weeks and months. For now, I am focusing back in on the daily miles, and recovering joy from all paces.

I grew up in the city. When I started spending more time in my husband’s hometown at the beginning of our relationship, everything about rural country living seemed novel. The most noteworthy phenomenon was the degree of familiarity between residents of the area. Everybody knows their neighbors. Beyond that, the oral histories of entire families are recited by rote. Each farm and road has its accompanying story, usually a narrative that is darkly bittersweet. Churches and deer nearly outnumber denizens, and the event of the year remains a town parade and carnival in the middle of the summer.

We move on in life, and our sense of “home” acquires a multitude of meanings. As we explore our passions and seek out opportunities to engage, new communities emerge. As our children progress through their educational journeys, we join fellow parents among the ranks of the village. In our professions, we solidify networks of colleagues, and come to find, rather incredulously, that we begin to be called upon as institutional or organizational historians, able to reflect on a sum of experiences. And, if you run for a long enough time in your hometown, you begin to find yourself a place in that community, as well.

I see the same familiar faces on my Saturday morning runs. Some belong to people I know from other parts of life. Some are simply recognizable due to repetition. As I reflect on that observation, I begin to realize that a community of runners functions like a small hometown. We remember the races, year to year, and make jokes about the weather and other unfortunate variables. We feel relief upon encountering an acquaintance on a dimly lit trail, or motivated to run all the way to the crest of the hill when we know a fellow runner is watching.

Maybe I’ve seen you two other times in my life, but if we weave around each other, back and forth, over the course of a soggy and miserable road run, we may very well embrace at the end.

“Thank you,” is a common muttering we hear between strangers at the finish line, “you kept me going until the end.”

Running is both solitary and collective. While we bear the responsibility for our own feet and legs, we also uplift other runners through our example, words, and presence. Often, the thought of being that face for another person is the reasoning that pushes me over the hump of lacing up my shoes on an early weekend morning. To those just beginning, we are all strangers. Give it time, however, and we will become their people.

August was a fruitful month, totaling 105 miles. This brings my 2016 mileage up to 778 miles… creeping closer to the 1,000 mile goal! I took more recovery days to walk and do different types of exercise last month, and I focused many of my shorter runs on speed work. Happy to report that there was some pay-off, as I placed first in a 25K road race last weekend! I enjoy setting new personal records, but there was a unique satisfaction of being the first woman to cross the finish line that I will carry with me in the memory bank of “triumphant runs” for a long time to come.

I have approached September, and it is time to fit in one more long run this weekend before tapering. While I am still running an early fall marathon, there’s been a change of plans. My running buddy broke her toe, and needs a few weeks to heal and recuperate. We decided to defer our race registrations for 2017. Running Chicago without my friend would not feel right to me. However, I’ve put a great deal of effort and time into training this past spring and summer, and so I decided to run my hometown marathon at the end of this month, instead.

As the marathon chapter comes to a close, I’ve been thinking about what I want to do next. While it has been invigorating and adventuresome to ramp up my speed and set new records for myself, I feel a pull back to the basics of why running fills my cup. The high of competition is ephemeral. I miss the meandering solo runs through the woods… with no particular agenda other than to traverse and appreciate nature. I am giving some thought to pursuing trail running more intentionally in 2017… perhaps doing some of the trail races and mountain runs that are so plentiful in this corner of the country. I would like to broaden my horizons and tackle some new experiences.

We all begin somewhere.

I was bitten by the running bug after I had my daughter, over five years ago.

Up until that point, jogging was an occasional activity.

When I gave birth to my daughter, and spent those first few tender months at home, I was consumed by depression. Taking care of a newborn did not come naturally to me. One day, I was a career woman with a busy schedule. The next day, I was sleep deprived to an extreme I did not think possible. I remember one occasion when we finally left the house to run an errand. In the light of day, my husband gently suggested that I might have a streak of baby poop on my cheek, and he wiped it with his sleeve.

I cried. I wept. I felt lonely.

I discovered, a few weeks in to this new life, that walking would be my medicine. No matter what had transpired the night before, no matter how demoralizing the patterns of the day, I could find salvation in walking.

At that point, we lived in a house in the woods—a good 30 minute drive from most hallmarks of civilization, including decent grocery stores. Nevertheless, the summer was relatively cool, and I spent many hours pushing a stroller around winding bends and pathways, exploring our community. Sometimes, the walks were the only time that the baby would sleep, and I could move freely, both hands unencumbered by the weight of flesh.

The walks became more frequent, and the baby also began to grow. As the summer petered out, my depression lifted, and I started to fall in love with my child. Somewhere in that span of time, the walks migrated toward runs. I left the baby at home with her loving father, and took off… exploring nearby lake trails and taking the daring risks of leaving pumped milk at home in exchange for an hour of freedom.

For me, running was born out of the growing pains of early parenthood. Each jog yanked my sanity back to earth, returning me home with renewed hope. My daughter grew in her early years, watching mama leave for runs and come back. The evening post-run shower became a ritual. First, to wash the sweat off my skin quickly before settling in to a nursing session. Later, I stumbled over rubber duckies and pitchers as my toddler sat at my feet keeping me company. These days, the bathroom door remains unlocked, and she will sit on the closed toilet lid, telling me about her school day while I rinse off my suds.

I feel pangs in my heart every year at this time, reflecting on the journey to this point. Fall has always seemed to me a time for renewal, despite the decomposition of nature’s greenery around me. Perhaps it is because I know that the hardest earned gifts often start from dark places.

We all begin somewhere. 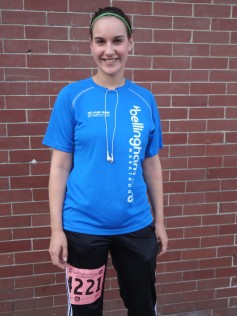 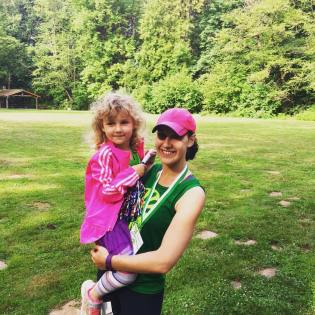